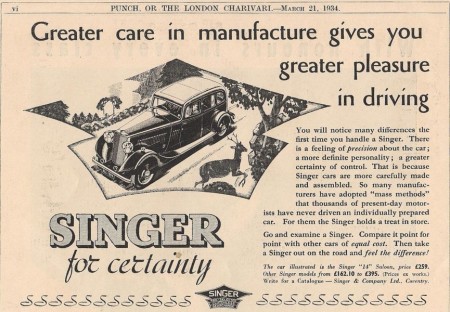 Singer Motors Limited was a British motor vehicle manufacturer, founded by George Singer in 1874. He began in Coventry with bicycles and progressed to car manufacturing in 1901. In 1905 Singer made their first four wheeled car.

In December 1936 Singer & Co Limited dissolved and was transferred to Singer Motors Limited. By 1956 the business was in financial difficulties and Rootes Brothers who had handled Singer sales since before the First World War, bought it and the Singer brand was absorbed into the Rootes Group

By 1970, Rootes were beginning to struggle financially. They had been acquired by the American Chrysler organisation, and founder Sir William had died in 1964. In April 1970, as part of a rationalisation process, the last Singer rolled off the assembly line, almost 100 years afterGeorge Singer built the first cycle.

In 1970 the Singer name disappeared forever.