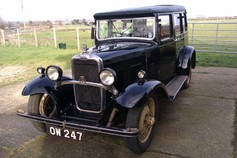 "Daisy" - a 1931 Singer 10. Daisy is very rare and it is unlikely that you will have the opportunity to ride in another one like her. According to the Singer Owners Club she is the only roadworthy Singer 10 in existance.

Daisy was the first of our collection purchased in October 2011. We have history on Daisy from the late 70's onwards.

The Singer 10hp was produced in saloon and coupe body versions. The original purchase price back in 1931 being £199.00. The sales brochure quoted .... "It's road performance is so outstandingly good - fully equal to that of many larger and costlier cars - the outlay involved in its upkeep is suprisingly low. Not only does the "TEN" yield a greater turn of speed than the average type of light car, but it is more elaborately appointed, has wider doors and in other ways is more commodious".